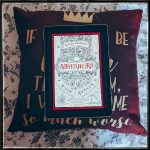 A friend of mine recommended this to me, otherwise I would never have stumbled across it, and I’m so glad she did! I’m not sure where to even start with listing the things I liked so much about this book. It was such a fun read… a bit kooky, with a large cast of fascinating and quirky characters living in and around a mysterious town hiding a lot of dark secrets.

One of my favourite lines reads – ‘Despite the gravity of the girl’s situation, Boris Polk yelled ‘yahoo’ and ‘bazoom’ as they cut corners at speeds Gorhambury would have thought impossible’ – it made me chuckle aloud

The fussy town auditor – Gorhambury – is probably my favourite of all the characters, but even though there is a lot of head hopping between characters in this book, I never got bored with any of the POVs. They’re all so interesting in their own ways (though sometimes I wanted to shake Oblong when he was being particularly useless)

Rotherweird is a difficult book to describe, but if you like to read fantasy that’s a bit unusual and super colourful and quirky, I highly recommend giving this one a go. It’s the first book in a trilogy, and I’m definitely going on to read the next one. ⭐⭐⭐⭐ from me!
.
.
QOTD: For those who have read this – who is your favourite character? They’re all so fun!