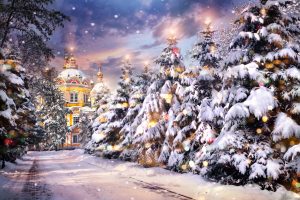 The fading glow of dusk settled over the old house as Christmas eve began drawing to a close. A breeze whispered through the trees of the forest surrounding it. Drifting snowflakes carpeted the world in white.

Another breeze ran through the trees, dislodging a clump of snow from one heavily-laden branch. A squirrel nibbling happily on his dinner below squeaked in affront as he was showered with ice-cold flakes. Shaking his ears, he scampered back up into the tree to re-join his family. He’d just made it into the shelter of the branches when something caught his eye—a light had flickered on in one of the windows of the old house nearby.

Tomas slogged through the deepening snow. He was tired and hungry and the jacket he wore was too threadbare to stop icy tendrils of air from penetrating through to his skin. Shivering, he came to a stop, hefting his backpack on one shoulder. At first glance it looked like he was in the middle of nowhere. Aching disappointment filled him—he’d been walking for hours through the forest, hoping to find shelter before nightfall. Now the sun was setting over the horizon and the biting air was growing even colder.

Blowing on numb fingers, he looked around again, this time his gaze snagging on a single flickering light amid the falling darkness. A moment later, the faint ring of bells drifted to him on the night air. When he frowned and stared harder into the gloom, he saw that the light was coming from a single window in an otherwise dark house. It was old and rambling, looking in dire need of repair. Still, it had a roof, and would be somewhere to shelter for the night. A wary relief trickled through him and he changed direction, making for the front gates. They stood open, one half-hanging off its hinges. Snatches of ringing bells sounded again and two more upper floor windows lit up as Tomas walked through the gates and began heading up the long driveway to the house. At one point he swore he could hear the sound of children’s laughter on the night air, even though his prints were the only ones in the pristine snow around the house.

Reaching the imposing front doors, he hesitated only a moment before pushing them open. They swung inwards with a groaning creak, and blessedly warm air rushed out, enveloping him almost like a caress. Stepping inside, Tomas stared in surprise at the fire burning merrily in the entrance foyer. An unbroken layer of dust covered the wooden floor and the mantle above the fireplace.

The word echoed back at him over and over, seeming to reverberate through the entire house. No response came. Shrugging, Tomas closed the doors to keep out the cold and stepped closer to the fireplace. As he stood there, debating what to do next, an arched door to his right swung open soundlessly. Golden-orange firelight from beyond shone through, illuminating the motes of dust floating through the air.

“This is creepy,” he muttered. But oddly enough he didn’t feel any fear. His instincts were sharp, and usually warned him if there was something wrong nearby. This old house was certainly odd, but not dangerous.

The bells sounded again, louder this time, almost immediately followed by a snatch of bright music. He was still debating whether to walk further inside when a rustling sound from above had him turning and edging back towards the front door. Moments later, a small figure appeared through one of the windows set high up in the wall, carefully lowering herself down. Tomas stared in astonishment as the girl dropped lightly to the floor, brushing clouds of dust and snow from her clothes, before turning to scowl at him. Though she only reached his shoulder in height, she looked about his own age, her clothing as ragged as his.

“Who are you?” she demanded.

She looked around, her glance taking in the dusty floor and the melting snow from his boots. Wariness surrounded her like a cloak, and if Tomas hadn’t recognised that feeling so easily, he might have been more intimidated by her scowl and challenging words. “You don’t live here either.”

He shrugged, keeping his shoulders relaxed. He sensed no danger from this girl either, and something inside him, something lonely, thought it might be nice to have some company. “I came looking for shelter for the night. The house seems empty, though.”

Her scowl deepened. “Lit that fire all by yourself, did you?”

“No, it was lit when I walked in.” After hesitating a moment, Tomas reached out a hand. “I’m Tomas.”

She stared disdainfully at his hand until he dropped it. “Amerla.”

“So,what are you here to steal?” he asked, unable to help the smirk that crossed his face.

“Like you, I’m just looking for shelter,” she said casually. He didn’t buy it for a second—the way her eyes were roving the room indicated someone familiar with casing a place. He’d done it often enough himself to know. “The snow is getting heavier out there.”

The sound of bells echoed through the house again. Tomas offered a smile. “It’s not a good night for being outside. This house seems pretty big. I’m happy to share if you are.”

“Try anything and I’ll stab you in the eyeballs,” she muttered, striding past him towards the open door.

Grinning,Tomas turned and followed. His mouth fell open in surprise as he stepped through. This room was lit by another crackling fire that filled the cosy space with the sweet scent of cedar. A Christmas tree stood in the corner, decorated with lights and baubles and a bright golden star. A long, plush-looking couch sat across from the hearth, a neatly folded quilt sitting at each end.

They both jumped as a scratching sound came from the old record player in the corner. Moments later, the tune to ‘jingle bells’ hummed softly from the speakers.

“This is weird.” Amerla’s eyebrows were narrowed in suspicion. “I don’t believe in ghosts.”

“Neither do I.” Tomas looked around the room one more time before dropping his backpack to the floor. “But it’s cold and dark outside. I’m staying.”

She stared at him for a long moment before finally conceding with a sigh. “You’re right.”

As Tomas and Amerla cautiously approached the couch, the door behind them silently swung shut, keeping the warmth in the room. Outside, red and green fairy lights strung along the eaves of the roof suddenly turned on. The chiming of bells swelled. 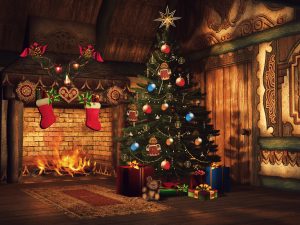 “So, what are you running from?”

Surprised she’d been the one to open conversation, Tomas shrugged. “The usual.”

Amerla acknowledged that with a small, sad smile. “You headed anywhere in particular?”

“Just away. As far as I can get.” He might be lonely, but he wasn’t in the mood to share his story. Not thinking about why he was running was the only way to stay sane sometimes.

Silence fell around them again, broken occasionally by popping from the fireplace.Tomas leaned down to pull off his boots and stretch his frozen toes out towards the warmth of the fire. “How long have you been on your own?”

His stomach rumbled then, breaking the tenseness. Her swift grin, as brief as it was, warmed Tomas. She has a face made for smiling.

Made sleepy by the warmth despite his hunger, Tomas stayed on the couch while Amerla crossed to the only other door in the room. This time it was the sound of chimes that echoed through the house as the door opened. Unbeknownst to Tomas or Amerla, lights now flickered in all the windows of the Christmas House.

“Tomas! You’re going to want to see this.”

At the stunned note in her voice, Tomas leaped off the couch and followed her through the door, stopping dead at the sight laid out before him. He’d entered a kitchen, the table running down its centre groaning under the amount of food lying on it. There were steaming mince pies, a whole roasted turkey, platters of roasted potatoes and a dish of green beans. Off to the side sat frosted Christmas cupcakes, a bowl full of candy canes and at least ten crunchy bread rolls. On the stove, bubbling away happily, was a large pot of what smelled like spiced apple cider.

“I think this is for us.” Amerla’s voice was light with disbelief.

Tomas reached out to rest his hand gently against the wall in thanks.”Yeah, I think it is.”

Tomas sat back against the deliciously soft cushions and let out a contented sigh. He thought his stomach might burst if he tried to fit any more in… he couldn’t remember the last time he’d been able to eat until he was full. Amerla sat on the opposite end of the couch, one hand toying with a loose thread on the quilt that had been left there.

“I was thinking of heading north.”

She was staring down at her hands, so he felt safe in letting out the smile that spread across his face. “Seems like a good direction to go in.”

“Tomorrow is Christmas, though. I think we should stay here one more night.”

Around them, the bells chimed.

That quicksilver smile lit up Amerla’s face again. “I’m okay with that.”

The squirrel scampered across the roof of the Christmas House before swinging down one of the drainpipes towards the ground. It was just after midnight, and the Christmas lights adorning the house glowed brightly against the white snow. The squirrel paused above one of the arched windows, looking through the frosted glass in curiosity.

Inside were two young people. A crackling fire flickered in the grate, casting a warm pool of light around the sofa sitting before the hearth. Empty mince tart wrappers littered the surface, along with two empty mugs and the remnants of a cherry pie.

Outside,the squirrel turned and headed back towards his tree, the memory of warmth and burgeoning friendship following him all the way back home… 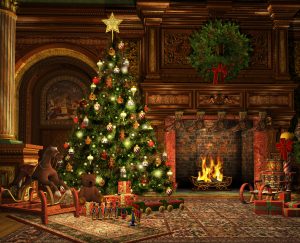